A Tool to Help You Get It Done 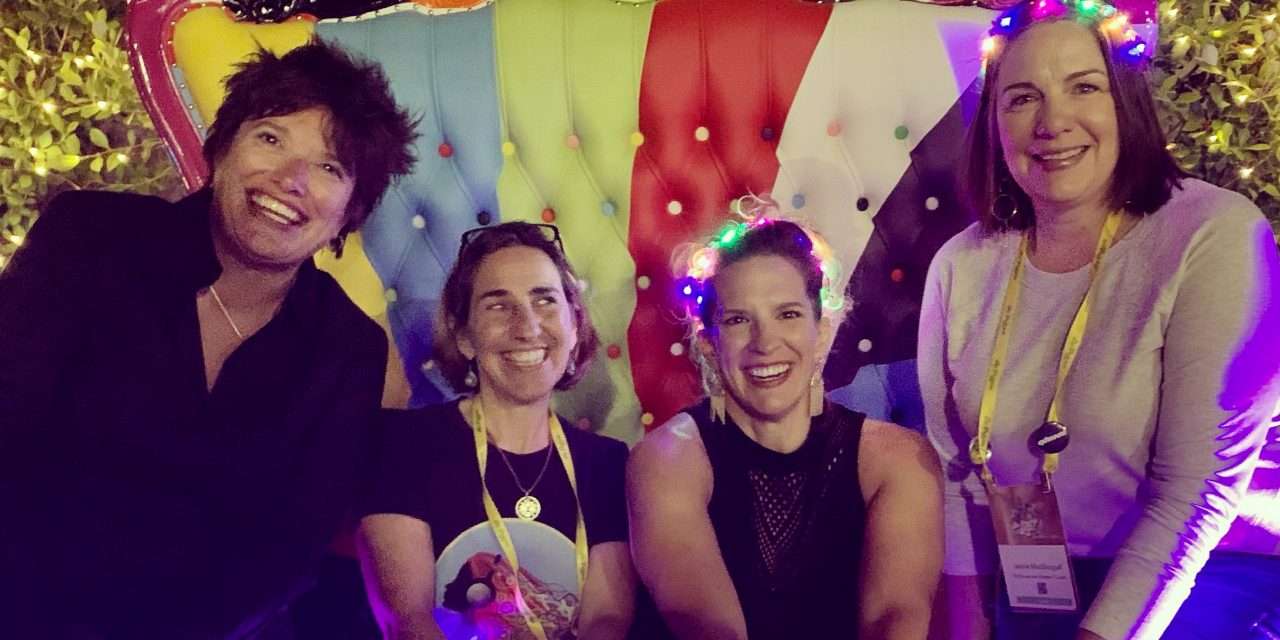 There’s nothing more grown-ass than creating a sisterhood of support. Women who lift each other up, call each other forward when necessary, and do it all with an open heart and mind. This was never more evident than last weekend, when I went to speak at She Podcasts Live. Almost instantly, I found my squad — three incredible women who just clicked. We ate meals together, sang songs around the fire pit (like, for reals), and were able to provide honest, candid, sometimes hard-to-hear feedback about each other’s creative businesses. It was magical.

When you’re a podcaster in such a position, how can you not record an episode together?

Alex Perry is author of Minivan Mogul, a Crash Course in Confidence for Women and host of the podcast of the same name. She’s also CEO of Practically Speaking, where she helps others speak with confidence, using strategies she’s learned throughout her career as a speech language pathologist, TEDx speaker, group facilitator, and mentor. Alex is one of those people where you meet her and you immediately stand up straighter and start really considering the words that you’re using. But she’s also one of us.  “I lead every talk with my native language is typo,” Alex laughs. Strong, sassy, confident… and real — yeah, she is my people.

Jen Edds is the head broad in charge at the Brassy Broadcasting Company. Jen is also a singer/songwriter who spent most of her music career in a supporting role… until now. Jen dropped her first album on her 50th birthday. If that’s not a grown-ass woman, I don’t know what is. UkuDaily Favorites, Volume One is a collection of inspiring and uplifting songs from Jen’s 2021 podcast series the UkuDaily Dispatch.

Marion Abrams is a podcasting coach and consultant. She built the Spartan podcast from an audience of zero to over 35 million views and downloads. She helps thought leaders and business leaders and podcast hosts to design and elevate their podcast presence. And she hosts her own podcast, Grounded Content. 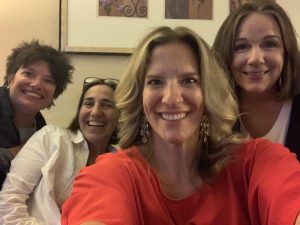 When Marion stepped to the front of the room on Sunday morning, I knew her talk was about challenges. But I thought it was about the challenges in our lives; you know, family, work, relationships. We’re grown-ass women, we’re no stranger to challenges. But what Marion was actually talking about was creating self-imposed challenges to see who you really are.

Hmmm… okay, I’m listening. But why in the world would we create a challenge in our already challenging lives?

“It’s a way that you can build a structure to hack your own psychology, so that you can get unstuck, or grow, or improve whatever you’re working on,” Marion shared.

When Marion shared her three step process, Jen, Alex and my suspicions were confirmed; we’re already the type of people who create and join challenges to help us get to the next level. This was a great reminder. In fact, Jen’s brand new album was created because of a challenge she just completed where she released 60 songs in 60 days. No, that’s not a typo — 60 songs in 60 days! Alex is constantly creating challenges to help her succeed. Hello! She’s completed five marathons and 37 half marathons!

And Marion? She’s the master of challenges; maybe it’s the Spartan in her. “I’ve been producing a self development mindset show behind the scenes for Spartan for eight years,” Marion added. “So I’ve been talking to mindset people every week for eight years and I would be there for the interview, edit the interview, write the show notes; so I’m like not only hearing them all, but hearing them all 10 times. So that obviously had a huge influence on me.”

In fact, it was such a strong influence, Marion woke up on January 2nd, 2019  with an idea. ‘I’m going to run one mile every day,’ she wrote in her journal. “I just was at a place where I was ready for that.”

And so I started running a mile every day and that worked, and then I just started doing that with all these other things. Because I felt that success and I was like okay, maybe I really am the kind of person that can do this stuff, which I never was, or never thought I was before. And maybe I even made fun of the people that would do these sort of like formal challenges or programs before, because I thought you know you need to just organically grow, you don’t need all that bullshit, right? But I found out using this tool was transformational, transformational in my life. — Marion Abrams

So maybe you’re thinking about challenging yourself… great. How do you begin? Well first, it’s important to understand you don’t need to create some massive challenge that makes it nearly impossible to complete.

What did Jen learn about herself during her UkuDaily Challenge?

I blocked time from 6-8 in the morning, because I knew I could consistently do that before I opened email and all of that stuff. Because if I started in client stuff, that’s the priority. I had to make my stuff the priority and block that time so that it actually got done. That was also a big takeaway for me too is make your shit the priority before you start doing everyone else’s because it’s been very easy for me throughout the course of my life to make everyone else’s the priority. — Jen Edds

Just in case you didn’t get that gem: Make yourself the priority.

How many of us wake up our phones and we start to check emails before anything else, and then we get caught up in other people’s energy before we’ve even had a cup of coffee? 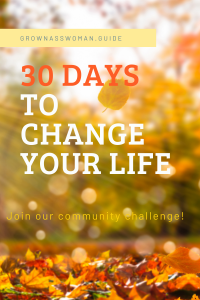 I love that you said it in a very specific way ‘cause it sounds like some kind of woo woo shit,” Marion adds.  “Make yourself the priority. We’ve even heard that probably a million times, but when you said I set aside time from 6:00 AM to 8:00 AM so that I did my project before I got into client stuff it’s like OH! Oh make yourself the priority. You hear the words over and over again but until you have that example, you’re like okay that makes sense.”

I was still smoking, which is hilarious if you’ve ever run a 5k and then like sit down on the ground and like smoke a cigarette afterwards — ridiculous. Who does that? I did. I absolutely did. I was like I’m the second to last person and I had to beat the guy behind me.  — Alex Perry

For Alex, “It was one thing at a time and it’s the power of accumulation that is really impactful. So the piece that ties us together is having the thing on the calendar, prioritizing it is a big, big freaking deal.”

So what do you say we do a challenge together? 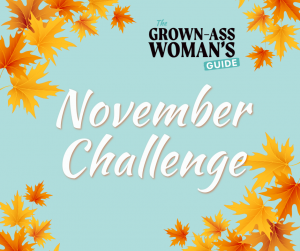 For the month of November, choose the task, frequency and duration of your challenge. Come into our Grown-Ass Woman’s Community to share yours. Then, we’ll hold each other accountable and have a successful month — together.

Are you ready to change your life? 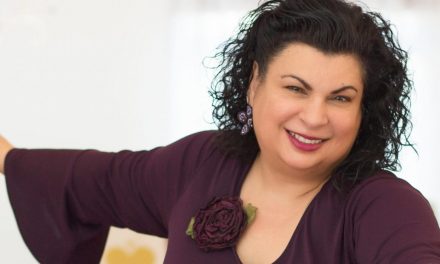 How to Start a Business Today How to Put the Joy Back in Your Holidays 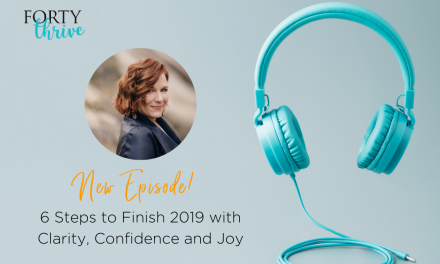 6 Steps to Finish 2019 with Clarity, Confidence and Joy 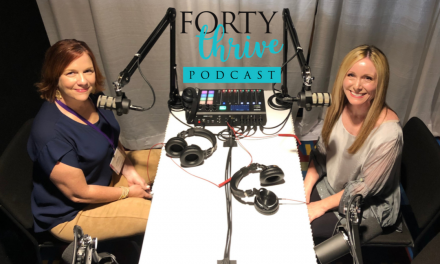 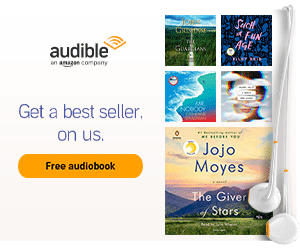